February blew CharmLab away! Not literally but almost. In the windstorm of 2010, we lost electric to our homes and rushed to the ABI offices for heat, power, and internet (Hooray!). After detouring around a few closed roads and lots of fallen trees and power lines, we watched pieces of the roof float down in front of our office window and were happy we aren’t on the fourth floor.
In other wind related news, the billboard that CharmLab was designing for Twins Smoke Shop blew over in the storm by the Mall of NH. Rumor has it that May is the target date for the board to be repaired. Here’s a photo of the dead billboard. 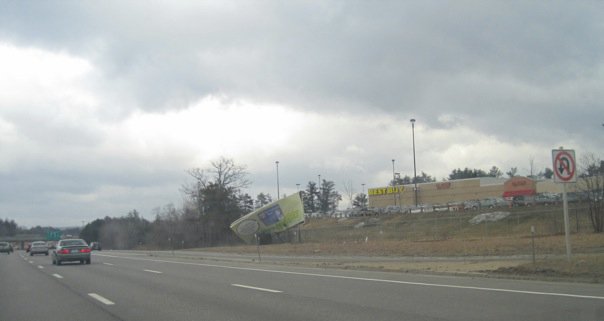 We are looking forward to the launch of two website redesigns in March for The New Hampshire Creative Club and LiftVest. CharmLab also became a Member of the Greater Manchester Chamber of Commerce this month, and will be donating our services for the Annual Chamber Golf Tournament in August at Stonebridge Country Club.